Chain Reaction, the Story of the Peacechain 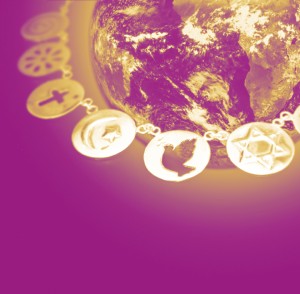 It began in 1999 when I was on an 8 day Ascension course with Britain’s wonderful angel lady, Diana Cooper. On my way home I was drawn to visit Glastonbury. There I found a beautiful 6 pointed star pendant. I loved the symbolism of the star – the bottom triangle representing earth reaching for heaven, the top triangle representing heaven reaching for earth, in the middle they meet and all is one. (I found the symbolism of my finding the star interesting too – when I stated my intention of visiting Glastonbury at the end of the course, a few other people decided to come along too. It ended up with 6 of us going, 3 each in 2 cars, meeting in the middle of town – 2 triangles coming together!)

I wore my star all the time, almost like a badge of office. But as time passed I became increasingly uncomfortable wearing it, as the situation between Israel & Palestine intensified. If I was wearing what was after all, the star of David – even though I was wearing it for it’s spiritual rather than religious significance, then I felt that I should also be wearing the moon and star. I began to look for one.

I looked everywhere I went; yet I couldn’t find a moon & star. Even when I visited a Muslm country, I couldn’t find one. Then in the aftermath of 9/11, when President Bush decided to bomb Afghanistan, I thought: “I need a cross in there too!” At that point I was inspired to create the Peacechain – a necklace containing the symbols of all main religions and cultures. The necklace represents all people and all ways of being, held together with the dove of peace. While wearing my necklace – no matter what was going on in the world, what was on the news or in the papers, I knew that there would always be at least one place of peace where all people, all cultures and all ways of being were held together in peace, tolerance and respect. I would wear the necklace as my badge of office, becoming a walking symbol of peace and tolerance in the world.

I originally designed the Peacechain because I wanted one for myself, and then decided to make it available internationally. I have always been moved and inspired by the Edmond Burke quote “All that it takes for evil to flourish, is that good men do nothing.” For me, action is my analgesia. I was not ‘doing nothing.’

The Peacechain can be worn by people worldwide to help counteract the increasing wave of intolerance and prejudice and to promote the alternative vision of world peace, unity and tolerance. So many people already share this vision and the movement towards peace is growing every day.   The more of us that hold that space of peace, the more it will grow, the further it will extend, the more people it will reach, the stronger it will become.  World peace can only happen one way – by enough individuals finding and holding inner peace. When that number reaches a critical mass, there will also be outer peace. Hence the saying “World Peace starts with YOU!” We can’t expect people on the other side of the world, who may have suffered decades of trauma and abuse, to put down their weapons and adopt peace, while we harbour all angers and resentments in our own lives. 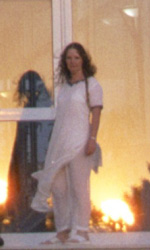 Whatever we are thinking/feeling is the energy that we put out into the world. You could say that we are all homeopathic doses of whatever energy we are holding. We can choose to be homeopathic doses of peace and tolerance. We can choose not to be drawn into anger, hate and judgement. The only way we can spread peace is by BEING peace. As James Twyman says, “Don’t pray for peace, for in praying for something we acknowledge its lack. Rather, pray peace. Become peace.” In other words – become the change that you would wish to see.

Diana Cooper suggested many years ago that we could all have a place of peace in our homes. Just one area, no matter how small – maybe simply one chair. But as long as we were in that place, we were to be peaceful, to think nothing but peaceful thoughts. Gradually over time, our place of peace would hold that peaceful energy and it would begin to permeate throughout our whole house, family and into our community. For me, wearing my peacechain has become like that, I carry the energy of peace with me wherever I go.

I created the Peacechain to not only be a political and ethical statement, but to also actively foster peaceful energy within the wearer. Inspired by the groundbreaking work of Dr. Masaru Emoto, the Peacechain and Peacechain bracelet have the words for “Peace” engraved in 12 different languages on the back of the discs. This is intended to affect us at a cellular level by imprinting the energy of peace onto the water molecules of the body. All the Peace jewellery has also been blessed in a temple in Thailand, to bring peace to the wearer and peace to the world. The idea is that you wear your peacechain as a badge of office. Every time you put it on, do so with the expectation and intention that while you are wearing it, you hold all people in equal respect & tolerance, you dedicate yourself to peace, you are a living symbol of peace, tolerance and respect in the world and you allow this energy to become the bedrock of your being.

Conceived by Elizabeth Harley in 2003