By Elizabeth Harley on 28th November 2018 in Uncategorised 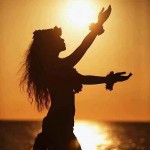 Reiki was discovered by Mikao Usui in Japan but spread to the west through the lineage of Hawayo Takata, through her beloved teacher Dr Chujiro Hayashi.
Mrs Takata was born on Christmas Eve in 1900, on Kauai, Hawaii’s “Garden Isle.” Her mother named her after the Big Island, Hawaii, but as girls names traditionally often end in ‘0,’ she was named ‘Hawayo’. When she was 17 she worked for the daughter of a plantation owner and that is where she met her husband, who was the plantation accountant. They had 2 daughters and were very happy until his death 14 years later.

After five years , between her grief and the strain of keeping the family going, her own health seriously deteriorated. When Hawayo’s sister died she decided to go back to Japan. This would also allow her to take her husband’s ashes to Ohtani Temple and to get treatment for herself in the Tokyo clinic where she had previously taken her husband.

We know the rest of the story – Hawayo refused surgery and instead was successfully treated at Dr. Hayashi’s Reiki clinic. She was determined to learn this fantastic healing ability for herself and completed a year of internship before taking her second degree level, ‘Okuden’. She returned to Hawaii with no intention of practicing Reiki other than for herself, family and neighbours. However, before the end of that year, due to demand from people who heard about the results Reiki was having, she had set up a healing room in Kapaa, Kauai.

Dr. Hayashi and his daughter later came over to support Hawayo and help promote Reiki in Hawaii. They held talks and healing sessions in Honolulu, Oahu. Before he left in 1938, he initiated Hawayo as a Reiki Master. Hawayo later travelled back to Japan to work at Hayashi’s clinic and was also with him at his transition in 1940.

By this time Hawayo was regularly invited to other Hawaiian islands to teach and offer healings. She got the opportunity to buy a house in Hilo, east coast of Big Island where she set up her  healing and training centre. There are lovely stories about her attuning the ranchers at the (still existing,) Parker ranch and how their attitudes to their charges softened. They began to use Reiki on the cattle, for any injuries or problems and also each new born calf was given a session – one paniolo told her that they had not lost a calf since learning Reiki!

By her transition in 1980 Hawayo Takata had attuned 22 other Reiki Masters, including her granddaughter, Phyllis Furumoto. Hawayo had ensured the continuation of the Reiki tradition and its spread worldwide, from one of the most beautiful areas of our planet.

The magical islands of Hawaii have also informed another of our lesser known Reiki techniques, the Psychic Surgery technique which is learned at the Advanced, (Master Practitioner) level. One key aspect of this powerful technique has its origins in Hawaii. This wonderful method of effectively and permanently removing negative or inappropriate energy from the psyche and energy field was originally taught to William Rand during his years on Hawaii by a Kahuna, or Hawaiian Shaman. William discovered that combining this powerful technique of removing negative energy with NLP, (his background,) and Reiki created an awesome stand alone technique that can cut to the core of a problem and can often clear it completely in a surprisingly short time. 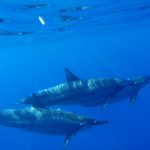 Hawaii has that magic, things just happen. In 2010 and 2011 I visited Hawaii to explore the unique energy, to spend time with the whales and dolphins, to run workshops and retreats and to visit the areas where Hawayo Takata had lived and worked. One day I returned to shore after a blissful swim in the bay with spinner dolphins and noticed a Kahuna holding a ceremony for the sea. She invited me to join and I went back the next day when she shared teachings on Ho’Oponopono. There’s a pipefish involved, but that’s a longer story! 🙂

I find it very fitting somehow that Reiki has such strong links to Hawaii. The land, the ocean, the people and the relationship between them have a beauty, wisdom and a magic that so fits with Reiki. The 2 words no tourist leaves Hawaii without learning are Aloha and Mahalo. Aloha is commonly used as the meeting and parting greeting and mahalo is used as “thank you.” I heard them said innumerable times, but sadly usually without reference to their deeper meanings. On the few memorable occasions they were said to me with true meaning, I felt their power as they touched my heart and soul.

Mahalo is a spiritual and divine blessing; it is given as a gift. According to the Kupunas, (Hawaiian elders) it should only be used when genuinely and truthfully felt. Native Hawaiians consider words to have mana, or energy. Aloha and mahalo are 2 of the most sacred and powerful words and can even be repeated as mantras to transform and empower. Aloha is an invocation of the Divine, it means love, but also embraces the spirit of friendship, acceptance, peace, compassion and charity. Its meaning can be described as, “the joyful sharing of loving energy in the present moment.” In sharing this energy you become attuned to the Universal Power that Hawaiians call Mana. The Aloha Spirit is the attunement of mind and heart within each person. It brings us to the Self. This could so easily be describing Reiki.

In the traditional aloha greeting there is a sharing of breath. In breathing the same air, we celebrate the recognition of being at one with each other and with the land and with all that has been and 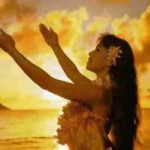 will be. Both breath and the land are very important to the Kanaka Maoli, the native people of Hawaii, who now number less than 16% of the total population. Hawaiian culture is based on oneness with the land and with nature. Love of the land is at the heart of Hawaiian language and customs including hula, chants, mele (songs), popular music, art, shamanic traditions, religion and politics.
As the Hawaiian storyteller, “Uncle Charlie” Maxwell, says, “The land which is the basis of the culture, with its streams, mountains, beaches and oceans, must be held in reverence and protected as it was in ancient times.

Author and psychologist Paul Pearsall quotes a native Hawaiian as saying, “We are at home. So many people who come here seem lost and emotionally or spiritually homeless. They keep moving, but they never really live anywhere. We love being in our place by the sea. We will never leave because we are this place”
This fits with what I found. I spent some time on the West coast of Oahu because of the dolphins there. Actually tourists are advised to avoid it as there is a higher population of native Hawaiians there than in most other areas and a strong and palpable nationalist spirit. A large number of people live in makeshift shelters on the beaches. Although there is a move to ‘clear’ the homeless people off the beaches – (sadly, especially the best beaches that would be of value to the tourist industry,) many people refuse to move. They say, “We are not homeless. The land is our home. We are only houseless.” A beautiful and insightful distinction.

Hawaii was a kingdom from 1810 until 1893 when the monarchy was overthrown by resident American (and some European) businessmen. It was then an independent republic until 1898, when it was annexed by the United States as a territory, becoming a state in 1959. Not everyone felt like celebrating the 50 year anniversary of becoming America’s 50th state! I find it as incongruous to call Hawaii America as I do to call Tibet China.
There are only just over 80,000 native Hawaiians amongst a total population of over 1.3 million – a shocking 5%. Of these, less than 8,000 are full blood Hawaiians, (which is defined as at least 50% pure Hawaiian.) When you add in visitors to the mix – in 2016 there were 8.9 million – you can see how the original culture and way of life is almost impossible to practice and maintain. Especially as in 2016 the U.S. authorities cut off access to some sacred sites, including Mauna Kia. 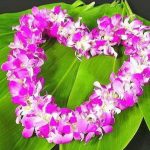 Despite this, the spirit of Aloha manages to survive. The Aloha Law suggests that each person must think and emote good feelings to others. It advocates kindness to be expressed with tenderness; unity to be expressed with harmony; agreeableness to be expressed with pleasantness; humility to be expressed with modesty and patience to be expressed with perseverance.
Although there is inevitable anger at what has been done to their country and people, one beautiful Hawaiian soul I met explained, “Aloha is our nature, it is our way. We have to reclaim and protect our country, our culture, our language and our way of life. We cannot hang onto anger and resentment, that is against our law of Aloha – if we do that we have already lost.”
Perhaps instead of being uprooted, the spirit of Aloha will blossom and spread till it touches all of the 1.3 million inhabitants of Hawaii, till it touches all of the 8.9 million tourists, and spreads from them around the planet like the red gold rays of the rising sun on Mauna Kia or the fiery energy of the new land birthed each day by the Goddess Pele.
♥ Aloha and Mahalo ♥

I will be writing an article on the Hawaiian on the Hawaiian healing technique of Ho’Oponopono, comparing it to the Tibetan Buddhist Tonglen and looking at how these techniques, along with Reiki, can assist us to both become more compassionate and at the same time cope with the suffering being naturally empathic and compassionate can bring. Remind me if it doesn’t appear here soon! 